Software development is no different from other areas of knowledge - some people can master it, some cannot. Some software developers can create high-profile applications, others deliver code full of bugs that never gets into production. As a result, some project owners successfully launch their projects while others struggle through inappropriate "red" builds with a lot of errors over and over again through months and even years. They change developers, but the results remain the same. Eventually, they get discouraged in their idea and quit attempts to launch a useful service.

There are specific reasons why project owners get through such frustration and disappointment. Here are common mistakes they make when handing over the project to another development company that you should definitely avoid: 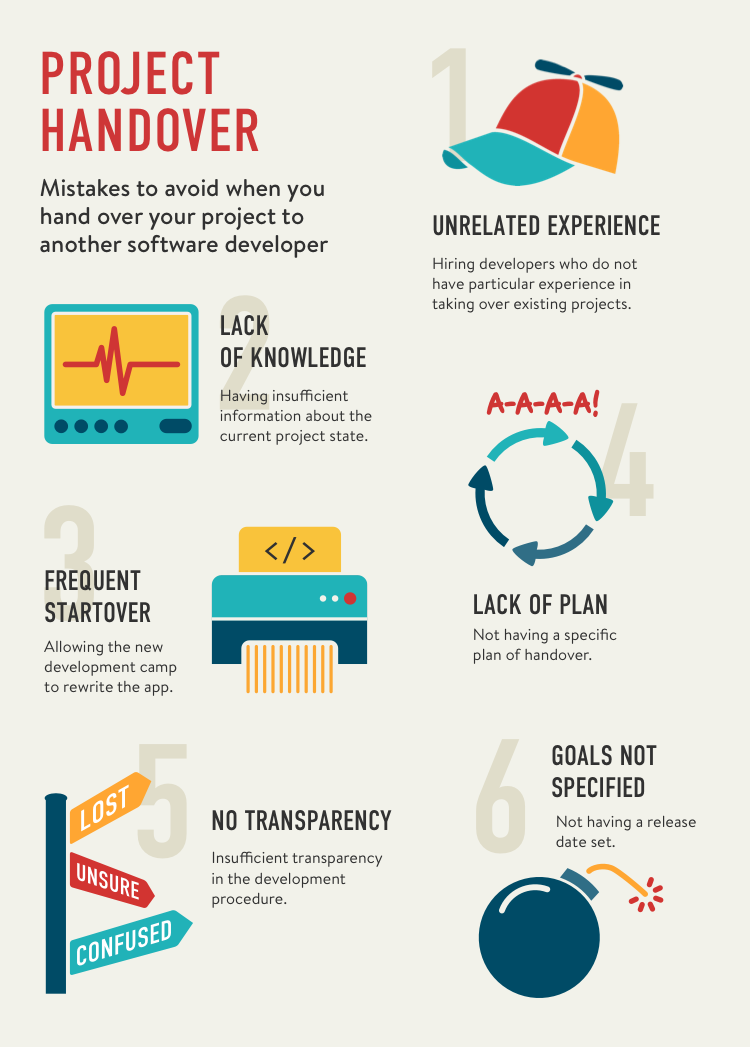 1. Hiring developers who do not have particular experience in taking over existing projects. Working on an old project is a special area of knowledge. In fact, not every software engineer knows how to get into an existing project correctly. This type of work assumes that the engineer should not only read the code written by other people, but also understand how it is supposed to work and how it is related to the customer's goals. If the developer does not have an established strategy to take over the code, he will drown in the previously developed stuff.

2. Having insufficient information about the current project state. Knowledge is power. Project owners should always know the state of their code even if it is poor. And even if they know that the code is poor, they should be willing to know how exactly poor it is because the project state has significant impact on the development plan. Not having enough information about your project means not being able to plan a success.

3. Allowing the new development camp to rewrite the app. All developers prefer to rewrite the old code from scratch rather than continue working on the same issues. However, if this is their main plan, most likely it means that they either do not have experience in taking over old code (see mistake 1) or do not take into consideration the time and budget constraints. From the business perspective, it is usually more reasonable and affordable to refine the code than to rewrite it.

4. Not having a specific plan of handover. Every development should be done according to a plan. A project handover requires a plan too, especially if the code is poor. In this case, the plan should highlight steps the developers are going to make to get reasonably good code out of poor code. If you do not have such a plan, your developers will fall into an endless cycle of improvements that do not bring real value to the business side of the project. You will still pay for those improvements, though!

5. Insufficient transparency in the development procedure. Project owners tend to rely on developers rather than to monitor and control the deliverables. This can work out if the project is new while the developers are your old friends with a familiar approach. But if you hand over a project, you deal with the opposite situation - the development camp is a stranger while the project can be an old haunted mansion. If you leave the developers there by themselves, you can get even more ghosts over time.

- Let them come up with a takeover plan. If they performed a code audit, they should have probably proposed a plan already. If they have not, you can ask them to provide such a plan. A good plan should include communication with the project owner and improving the test coverage.

- Ask whether they prefer to rewrite the project from the ground up or continue with the current code. This question should show how they understand your business goals. As I mentioned, developers usually prefer to rewrite the old code, which is normal. But professional developers can do more - they can take into consideration your objectives and constraints. See how they do that and make sure that you have made the right choice.

- Check what kind of questions they have. An old code base assumes that new developers should have a lot of questions. But the type of those questions is what really matters. They should ask you about the way the application should work rather than how it does work. Also, professional developers never want to talk with the previous developers about technical questions. They focus on the business goals instead.

These tips should help you understand capabilities of the software developers you are going to hire. We strongly recommend that you hire only professional engineers who have proven strategies in taking over and launching old projects.

Request a code review report to get a better understanding of the state of your project and learn the most effective way to launch it.