Any QA engineer in any project sooner or later reaches the point when it is necessary to automate the testing, no matter if it is a web or mobile application, Android or iOS. For example, we have faced the need to implement a complex and hard to understand workflow. In the course of development we discussed with our customer all the wishes and requirements, noted and documented everything. However, in a couple of weeks, it is not easy to test it and recall all the fine points. That is why it would be great to get it automated.

Our project Hey Ya! is an application for Android and iOS with a web server on Ruby on Rails. The tools provided by the Internet are: Calabash Android, MonkeyTalk, Robotium, Selendroid, UIAutomator for Android and Calabash iOS, Frank, UIAutomation, KeepItFunctional and ios-driver for iOS.

All of these tools work well but do not all of them meet our criteria, which are:

The tool that was chosen is Calabash.

The following is a guide, based on what we have learnt about mobile app automation testing with Calabash.

First of all we need xcode. We install gem and generate calabash-ios-setup command in our project. The calabash-ios-gem command generates skeleton which is almost the same as the Cucumber's one, aside from the fact that it has its own launchers. In the screen you can see the launcher for iOS application. 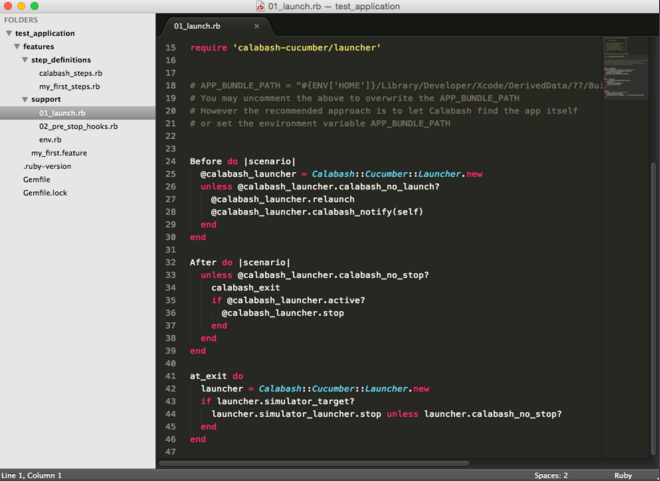 The calabash-ios-setup command generates the Calabash schema for iOS project right in xcode and connects Calabash framework to the project. It is executed very easy - with just a single command.

To run tests on the real devices, we need the bundle-kit of our application, which can be accessed from xcode and device end point. Device end point is an IP of the device connected to Wi-Fi. With Calabash, automated tests for mobile application on iOS are run using Cucumber as the launch command. The launch command is just Cucumber. Thus, the tests are run. The environment variable may be set in the command or specified inside the launcher.

The process of installation on Android is almost the same. Only the launchers in skeleton are different. 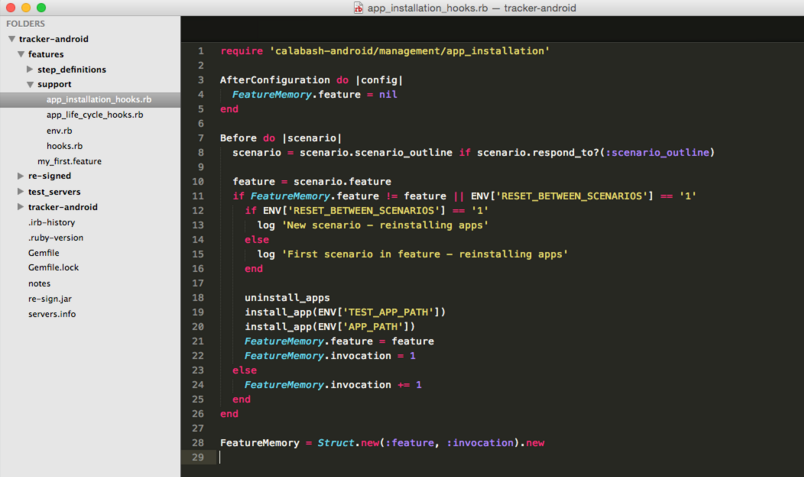 The tests on Android are run by the calabash-android run command with the specified path to apk-file. For iOS, it is necessary to assemble (build) the application on the device beforehand. Also, it is essential to build it with Calabash scheme, because the test server is installed directly in the app.

How to avoid duplication?

The given state of things implies that we have two projects (iOS and Android). Let's take an ordinary feature, for instance sign up. The structure of Cucumber is well-known: we have a file-feature, then the file-steps and we use page_object_pattern, after which the implementation of the functions invoked by steps is performed. It turns out that till a certain phase we write the same code: sign_up_features and sign_up_steps are similar in iOS and Android. Why? Because the design of our applications is almost identical. "Almost" because some things are not possible in Android but feasible in iOS and vice versa.

What should we do to avoid the duplication? A special gratitude here goes to Dmitriy Dordovskiy and Andrey Kutejko for their valuable assistance in delivery of the following solution.

The remedy is trivial and easy: to install gems on the server side, i.e. extract Calabash out of our mobile projects, split page_object into modules and glue together calabash_iOS and calabash_Android launchers. 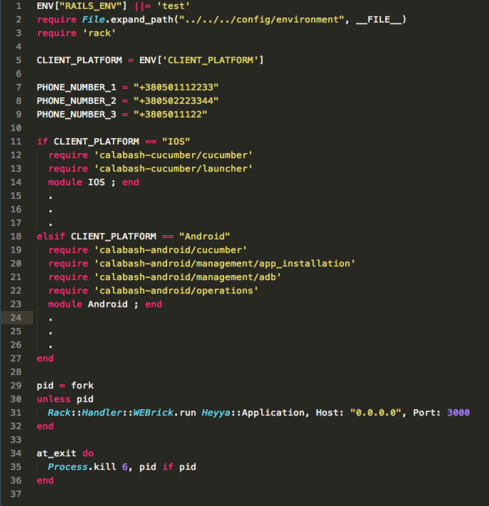 Now, if we specify the iOS client platform in the environment variable, the Cucumber will be activated. If we run tests on the Android client platform, it will go with Calabash Android path and will display corresponding files and methods.

One of essential things here is running the test server. It means that our app doesn't use staging/production but goes to the local server. The tests are stored together with the server on the server side. We have access to the server and it does not require efforts to run it. We run it on the host 0.0.0.0 and in the application we set the host which we will use - IP.

The next step is splitting page_object into modules. The features folder contains page_object_pattern and now it also holds Android and iOS. Here is an example of one module pages general - it stores code that executes our iOS-actions. In the Android folder there is everything associated with Android: pages and all the necessary methods. 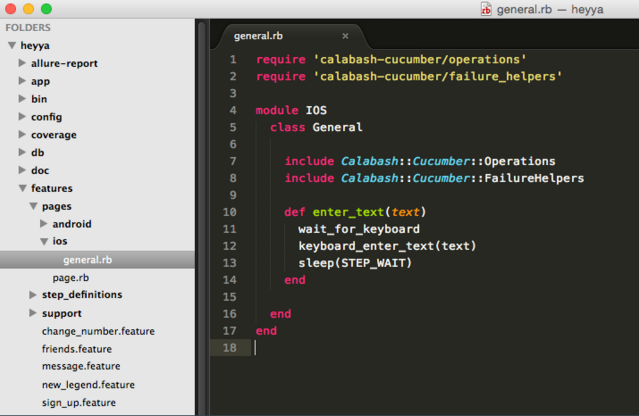 What do we get with this approach? We have a single signup_feature file instead of two ones and one signup_steps_rb file. At this stage, we do not make any separation because we have the same steps for iOS and Android. After the steps file we follow iOS or Android path and use iOS- or Android-modules. The launch commands look like this: the platform is specified, run by cucumber or calabash-android run commands and checked.

Let's sum up all pros and cons of the given way of dealing with Calabash test automation for mobile apps. The advantage of such implementation is that we do not have a duplicated code in feature and steps_rb files - we significantly reduce efforts on writing and duplication. It is possible to access objects via ActiveRecord and emulate work of the second client on the server side. In particular, our application does not have the logout function and sometimes it is necessary to test the cases where the first client has done something and we use the second one to check this. Thus, on the server side, we emulate the work and we use the client to make the check.

Obviously, there are some disadvantages of this approach. However, they are purely visual, i.e. different launch commands (cucumber, calabash-android run). Also, it is not possible to work in the debug mode, provided by calabash (the remedy is binding.pry). We have to stop in the required place, check it in the debug mode, verify all what we want, find the needed element and then continue to work. So, the disadvantages exist but they are not crucial.